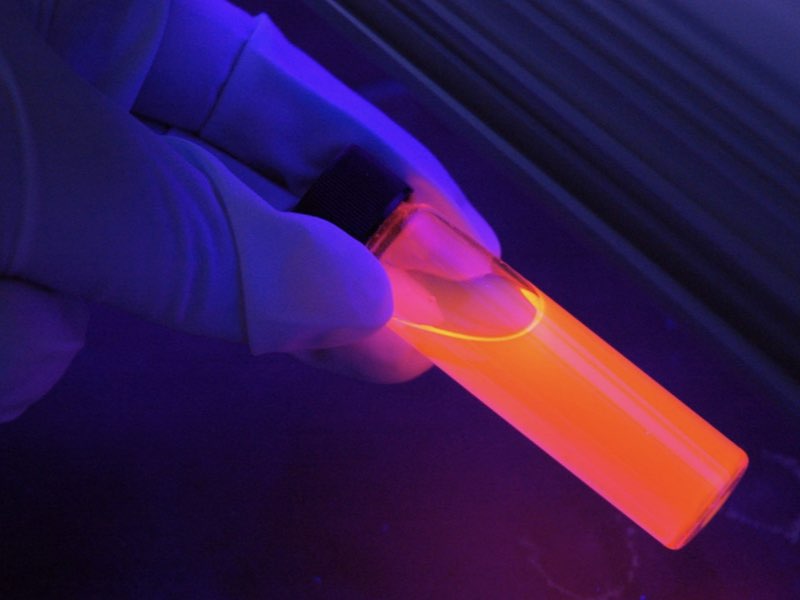 Quantum dots are nanoparticles that exhibit physical properties distinct from their bulk counterparts. They fluoresce into different colors, they can be excited to emit waves, and they can be tuned based on size.

In 1998, a paper was published describing how Quantum Dots can be encapsulated in aqueous materials. That initial publication was followed by more than 100,000 manuscripts on the topic., More than 10,000 papers were published in reputable journals about the applicability of Quantum Dots to medical science, including in-vitro imaging, drug delivery systems and bio-diagnostics.

Alex Zhang developed the foundational technology for using Quantum Dots in diagnostic devices for identifying virtually any kind of biomarker. In 2013, Alex created the prototype for the world’s first Quantitative bio-diagnostic device.. Alex is now a core member of the GeneHarmonics team.

Fast forward to the present.

GeneHarmonics Inc., in coordination with one of its companies, is validating the first and only prototype of the Quantum Dot Rapid and Quantitative Neutralizing Antibody (NAB) Test. NAB has passed initial validations in Asia on hundreds of patients with promising initial results. The NAB test is designed to give quantitative readings of the level of N-type Covid19 antibodies present in the body. Giving medical providers a quantitative reading on the presence of antibodies (not just the simple “yes” or “no” that current tests provide) will give the patient a more accurate measure of their current condition, and an extra measure to use to decide on the need for vaccinations and/or boosters.

GeneHarmonics is simultaneously validating our Quantum Dot Rapid and Quantitative Antigen Test Prototype. Our Antigen Test, subject to further tests and validations, has been exhibiting a 99% accuracy rate (using mPCR as comparable devices) as against the 50% to 70% in devices that are currently available in the market. In an infectious disease scenario, that increase in accuracy is a very significant benefit.

Jimi Sta. Maria, the Founder and CEO of the Harmonics Group – GeneHarmonics (parent company), BitHarmonics (data company), and NanoHarmonics (Marketing coordinator in the US), has been working with Alex Zhang on adding the use of frequency and resonance, as a measure to determine the sizes of Quantum Dots, pre-bio-conjugation as well as post, to eliminate the possibility of cross-bleedings due to resonance issues. Jimi has also developed the initial schematic designs for the first multi-biomolecule quantum dot diagnostic devices in the USA. He is developing the architecture for platform, blockchain, and IOT with data fidelity, anonymization, and military grade encryption features to collect surveillance data for predictive modeling for infectious diseases. Our existing prototypes are already more technologically advanced than what is currently in the market, and further innovations in our prototypes are already underway, including portable units that can be deployed in the remotest parts of the world integrated with portable power sources, compact units for internet connections and secured data transmission protocols.

GeneHarmonics is also developing DIRECT TO CONSUMER diagnostic devices that don’t require FDA approvals. With these devices and our portable units, we aim to democratize testing to the level of the medical practitioners and the patients themselves. Tests in our current development cycle include: (a) Vitamin D Test, (b) Ovarian Reserve Test, (c) Syphilis Test, (d) Hepatitis C Test, and (e) HIV Tests. There are more than two dozen additional tests that are characterized by the FDA as DIRECT TO CONSUMER tests.

GeneHarmonics also sees a significant opportunity to use the convergent technologies of diagnostics, data platforms and delivery systems to provide far better outcomes in the field of infectious disease. We have already started work on rapid and quantitative diagnostics for malaria, including data surveillance and mapping, and anti-malaria drug delivery systems.

GeneHarmonics is collaborating with centers of excellence in Asia to identify biomarkers that are relevant to specific drugs that are in the process of being developed. Using bio-conjugation with Quantum Dots in this way, Quantitative biomarker tools can potentially accelerate drug development as well as reduce the cost of such development.

“That our generation has the capability to work with the smallest kernels of our existence is truly astounding. To use atoms to measure biomarkers…then to use bits to organize and secure the data into useful information…then use those information to develop drug delivery systems that will benefit mankind. It’s the convergence of technologies based on discoveries surrounding the atom, the bit, and the cell that will drive the next technological revolution in our society.”